Are there malls and department stores in Cuenca?

Believe it or not, Cuenca has everything that any other city with a population of half a million would have in the U.S. There are two huge malls, each on different ends of town. We took a short video of one of the malls called “Mall Del Rio”. We were pretty impressed with Mall Del Rio. It has nice restaurants, major retail clothing stores, department stores, several electronic stores, movie theater, café’s, bakeries, candy shops, KFC and Burger King, pizza shops, children’s clothing shops, you name it, it’s here. Who would’ve thought you are in a third world country?


There are three huge Mercado’s scattered throughout Cuenca that sell every kind of fruit and vegetable imaginable, cheap! And there are smaller produce stands everywhere. Cuenca boasts two movie theaters; the movie house in Mall Del Rio has five different movies showing at different times throughout the day. Some have English subtitles. We’ve been told there is another movie theatre somewhere in Cuenca, just not sure where it is at this time.

Cuenca has many restaurants, from traditional Ecuadorian fare to Mexican, Columbian, Indian, and Italian. Whatever you are in the mood for, Cuenca has it; although, you will pay more for Italian and Mexican food than for Ecuadorian. The two major grocery stores are Corel and Supermaxi, both have three locations throughout Cuenca. Corel is more of a Wal-Mart type store because they have hardware, electronics, appliances, tools, clothing, linens, house-wares, and groceries. Coral is where we do most of our shopping, except for our produce, which we mostly buy from the farmers at the Mercado.

We have heard that dental and medical care is wonderful here with sparkling clean facilities but at a fraction of the cost you’ll get in the states. In fact, the news headlines are saying that Cuenca Ecuador has the some of the lowest cost medical care in the world. This is one reason so many older expats are moving here to retire. The full story is found here: Medical Tourism Hot Market in Cuenca. 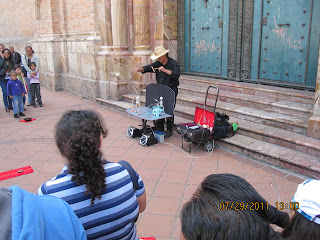 Cuenca has numerous outdoor markets with handmade goods that the local artisans create. You can find beautiful wool blankets and clothing, custom furniture, wooden handicrafts, leather goods, and paintings by the local talent from Cuenca. There are plays a couple a times a month as well as symphony’s and orchestra’s playing at different locations throughout Cuenca. The play Romeo and Julietta is showing in September. I’d like to go to that play. 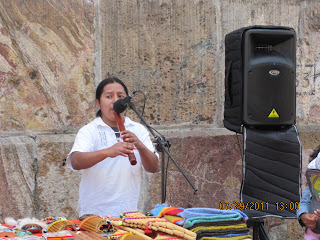 Yes, there is lots of shopping here in Cuenca, no matter what is on your list; there are about seven museums and other historical places to visit to learn about the history and culture of the Ecuadorian people. Cuenca has four different rivers that run through the city from the Andes Mountains. 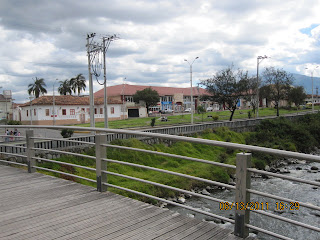 And there are beautiful parks and cobblestone streets for leisurely walking. I can pretty much bet that you won’t get bored because there is so much to do and see here.
Posted by Discover Cuenca Ecuador at Monday, August 22, 2011