When we first moved here, about six weeks ago, family and friends were asking us what is it like to live in Cuenca Ecuador? Some of them asked us if there were sheep in the roads. They wanted to know if the roads were gravel roads or paved and they wanted to know if you can drink the water out of the tap. 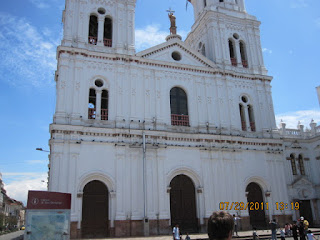 My very first impression of downtown colonial Cuenca was a feeling of being taken back in time or of being in a southern Italian town. The narrow cobblestone streets line a four-mile by six-mile area which is known as the historic district. There are a lot of very old colonial buildings and museums of Ecuadorian history in this part of town. Huge Cathedrals of vast proportion adorn the city of Cuenca, even if one is not Catholic, it is awe inspiring to see these cathedrals, built of marble, with their tall arched ceilings, and painted murals; it is a sight to see. 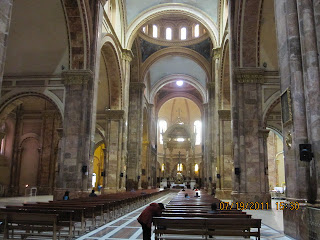 Now had there been sheep in the road, but there weren’t, it would not have surprised me in the least. One day when we were at the Mercado of Feira Libre right off of the road of Las Americas there was a indigenous woman standing on the side of the road to the entrance to the Mercado, offering us fresh goats milk. This goats milk is non pasteurized and non FDA approved coming right out of the goat right there and now! It was so cool! The neat thing is you get to see the goat you are drinking from. Is she healthy looking? Is she clean where cleanliness matter most? Yes on both accounts. This milk is cleaner and healthier than the pasteurized garbage they call milk in the grocery stores.

No Sheep, Only Bulls in the Roads

Now we have seen plenty of cows in the roads and many farmers just tie up their cows and bulls wherever the grass looks green, it may be your own back yard. It’s kind of scary walking right past a bull on the side of the road, but they are quite docile and usually don’t pose too much of a threat. But no, there are not sheep all over the roadways, at least not in the cities; there are only cows and bulls that we have seen so far.

Yes, the Roads Are All Paved 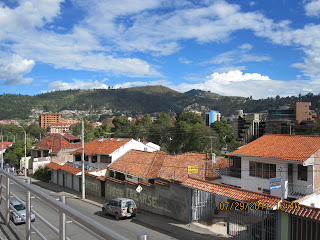 The roads are all paved and very nice and well taken care of. Here in Cuenca there are always road workers improving on parts of the roadways that have gotten worn. The roads are wide and two or three lanes almost everywhere in Cuenca, except for downtown where it is narrow, cobblestone streets. The sidewalks could use some work as many of them are not level and have big gaps and holes in the cement and weird protruding things sticking up from them. If you plan on walking a lot, like we do, wear a pair of comfortable shoes, and do keep an eye on where you are walking, lest you stumble and fall.

We’ve lived here going on 6-weeks now and have never bought bottled water. We’ve been drinking the tap water and none of us our sick or dead yet. You really cannot believe everything you read. Some blogs say you can’t drink the water and some say you can. We took our chances and just drink it and we're still drinking it with no problems. The first time I tried the tap water I noticed fresh, almost spring water like taste, unlike in the U.S in the south the water tastes very chemically and metallic. The drinking water in Cuenca comes from the many glacial lakes that are made from the mountains of the Cajas National Park. Yes, you can drink the water in Cuenca but not in the coastal cities. 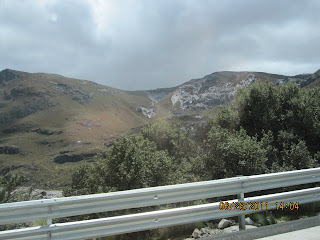 Cuenca is an emerging, developing city that has good clean water, and better plumbing than elsewhere in Ecuador. It has all of the conveniences you will find in the States or in Europe. Some of the people may still do things in the traditional way or old fashioned way but this is what makes it so incredibly neat to live here. Where else can you drink a glass of fresh milk right from the goat?
Posted by Discover Cuenca Ecuador at Thursday, August 04, 2011