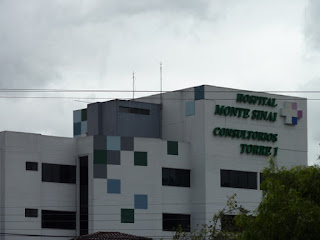 Someone asked what the medical care is like in Cuenca. We can’t personally answer this question because we have not been to a doctor or dentist, yet, but we have heard that the medical care here is very good. I came upon a great article about the medical system, which I am passing along to our readers. It lists some of the costs of medical procedures here in Cuenca. There is a huge hospital here in Cuenca called Mount Sinai and apparently they have an English speaking staff. We went inside one day to use the restroom and the first floor was like a mini mall, it was modern and sparkling clean and had a nice pharmacy. There are pharmacies every couple of blocks here, so you will not have a problem filling your prescriptions.

One interesting thing about Cuenca is there are a lot of health food stores that sell all kinds of herbs, health concoctions, vitamins, and cleanses such as the Psyllium husk colon cleanse. I like psyllium husks myself and I do the psyllium husk cleanse every couple of years. I also take a maintenance dose of a tablespoon of psyllium each morning with black strap molasses because it helps keep me regular.

I looked for psyllium here in one of the natural health stores and found whole psyllium husks but there are also two other ingredients in it--papaya and mangoes---so I thought that was interesting and I bought a canister of it.


Here is the article I found on Cuenca Ecuador Retirement. Enjoy!

Although the low cost of health care in Cuenca has long been a draw for foreigners relocating to the city, it is beginning to catch the interest of international medical tourism companies.

Alex McClellan, a former U.S. hospital administrator, says he expects to see increasing numbers of foreigners take advantage of Ecuador´s low medical costs. And, he adds, Cuenca is poised to capture much of the market. McClellan, who has worked in the medical tourism industry in Mexico, Inida, China and Malaysia, says he is forming a Quito-based company and plans to center much of his service in Cuenca. “We have brought our first clients to the city and have been very impressed with the results.”

According to Ecuador´s Investment Corporation (INVECE), costs for major medical procedures generally run just 7% to 10% of those in the U.S. and many European countries. McClellan adds that medical care in Ecuador is substantially cheaper than that in better-known medical tourism destinations, mostly in Asia and Central America, often by as much as 50%
.
INVECE director Xavier Patiño has compiled a cost comparison list of medical procedures in the U.S. and Ecuador, including:

Patiño says that it is not just foreigners coming to Ecuador for medical care. “We see many Ecuadorians who live in the U.S. come home for services.”

Xavier Crespo, a Cuenca native working as a financial advisor in Miami brings his family home twice a year for medical check-up and dental work. “The savings more than pay for the trip and we get to spend time with our family.” He adds: “From personal experience I can say the care is actually better here than in the U.S. The doctors are able to spend much more time with patients and don´t have to rely on all the tests that doctors are required to perform there.”

Dentistry is another area where patients see a large price differential. Cuenca dentist Nelly Sacoto says she has seen a rapid increase in the number of foreigners coming to her practice for care. She points out that she can install a porcelain crown for $200 while the procedure costs $2,000 in the U.S.. “Because many dentists in Cuenca have training in the Europe and the U.S., foreign patients have a higher degree of confidence in the local dentistry.”

Another Cuenca dentist, Marcelo Guillén, says he is seeing many foreign elderly patients. “There seem to be more and more retirees moving to the city and many of them are pleased with the dentistry here, especially in the area of aesthetic reconstruction. For them, it is very economical in Cuenca.”

McClellan, who says he has established relationships with two Cuenca hospitals and more than a dozen medical specialists, cautions that there is much more to good medical care than cheap prices. “It is important to work with an organization that has a solid track record in medical tourism. For potential patients, it is definitely a buyer-beware situation.”
Posted by Discover Cuenca Ecuador at Saturday, September 17, 2011