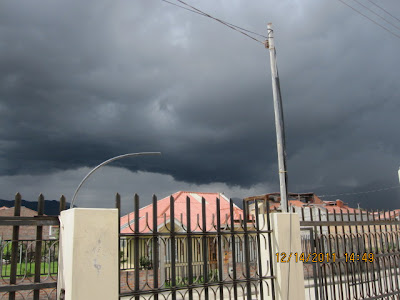 Cuenca in the summer has been a bit cloudier and chillier than in the winter, if that’s possible. For some reason we thought it might be warmer in summer here than in the winter; not sure what gave us that idea.LOL

It is summer in Cuenca and it has been cooler and rainier than winter! We think it is important to let our readers know how the weather REALLY is here in the Andes of Cuenca. Perhaps it is a fluke of nature and we’re just experiencing a rainier summer this month, but you would think it be dryer in the summer than in the winter and spring.  And it is probably cooler because of the cloud cover. Without the sun coming out it stays in the 60's.

If you don’t mind mostly cloudy days with periods of rain and drizzle, in the mid to upper 60’s, and when the sun peeks out of the clouds, low 70’s, then Cuenca is it. If our readers are coming from say, Washington, Oregon and even Northern California than this weather will be wonderful for you—it will be pretty much the same as you are used to, although we would venture to say the sun probably shines in those northern states more than in Cuenca.

They all say the weather in Cuenca is spring-like. Well, they are partly right. The weather is not cold and snowy like Minnesota and it is not hot and humid Houston Texas. No, Cuenca weather is not snowy or humid, so in that sense it is quite mild. It is NEVER too hot, but it is usually chilly in the mornings and if the sun doesn’t come out from behind the clouds, the house never warms up.

For some people this kind of weather is spring-like. It usually rains more in the spring in North America, so yes, it is spring-like here, even in the summer. Right now at 10:30 in the morning, the sun is peeking out of the mostly cloudy sky and Frank is sitting outside on his Adirondack chair trying to warm up. He even took his flannel off for about an hour this morning, but now has it back on. I have my two little portable heaters next to me wherever I happen to be in the house, (I’m always cold here) and with that I have adjusted to the change in weather; that being from southern, eastern U.S.

BTW, our two portable heaters in the month of November really brought up our electric bill from about $35 to $100. So if you want to stay warmer in your house, apartment, or condo, and you use electric heaters you will have a dramatically higher electric bill each month.

Wood stoves are not normally used here; we haven’t even seen them for sale. But if we had a wood stove, we would probably load it up every morning just to get the chill out of the house. As of this writing the sun went back behind the clouds and it looks like it is probably going to rain again.  This is to be expected when you live in the mountains of Ecuador.
Posted by Discover Cuenca Ecuador at Friday, December 30, 2011