Some have said that “La Victoria” is Like “Best Buy” of the U.S, but we have mixed feelings on that. There are no electronic stores that actually compare to Best Buy that we have found in Ecuador, yet.
The two stores should not even be compared, not only because of the huge price differences but because of inventory difference. Best Buy has a lot more inventory on computers and cameras, with many different name brands to choose from, whereas La Victoria is a nice store and everything but not as much inventory there.
Computers at La Victoria cost about $250 to $350 more for the same exact computer at Best Buy. This is why it is a good idea to bring new laptops with you when you move here.
Huge Inventory of Musical Instruments
La Victoria does however have a much bigger inventory of musical instruments than Best Buy does. There are two stores in Cuenca that we know of. There is one in Mall Del Rio (much smaller store) and the bigger store is downtown on Gran Columbia. This store has two rooms full of musical instruments!
We have had several people ask us about prices on musical instruments here. We took several pictures of the musical instruments and their prices.La Victoria may be a bit higher priced than some of the other music stores in Cuenca. Coral also has the same musical instruments we have listed here, but not as many different brands and sizes to choose from. We chose La Victoria because they have a pretty good selection.
Guitars
They carry a lot of different guitar types. We did take down some prices and the cheapest guitar was $65 and the average price was $150 to $250 for the guitars you see in the pictures below. click the photos to enlarge. 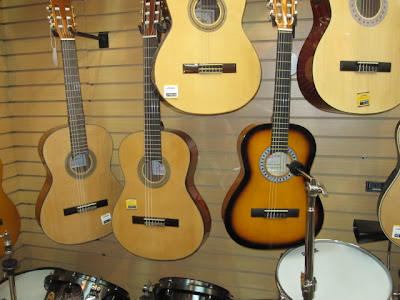 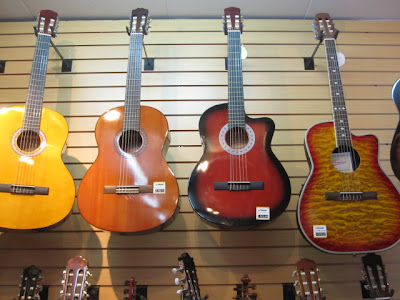 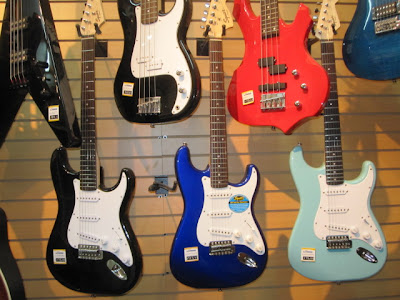 Drum Sets
They had several different drum sets. The one in this picture was priced at $350. They had a less extravagant looking drum set in the window behind the glass as you walk into the store, but we couldn’t tell what the price was, sorry…but it had to be less than $350 because was not as stylish as this one, although it was still nice! 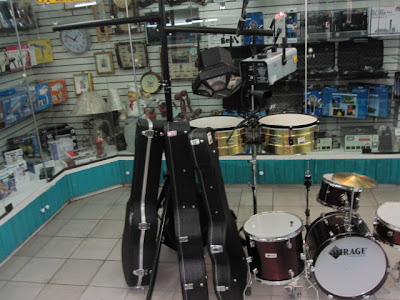 Bongo Drums or Conga Set
For this big set of bongos they were asking $500 but they had about six different, smaller sizes in the window starting at $120 on up. This was a really neat set of bongos. Bongos are fun to play around with even if you're not musically inclined. We had two sets we had to give to Good Will before we left to come here. That was sad. Oh well, this is just a new chapter in our lives. 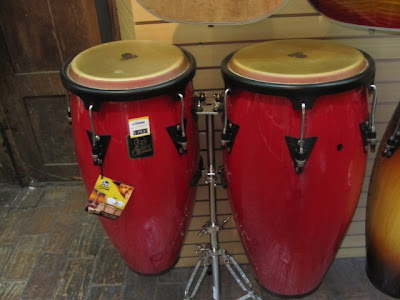 
They had about eight different sizes of keyboards. The ones you see in the pictures were priced at around $800 to $850 but they also had a few smaller sized key boards and still pretty nice for $250. 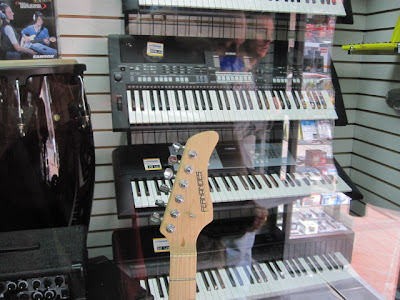