There are many stray dogs wondering around Cuenca. Most of these stray animals eat whatever garbage they can find on the streets. Many of them are sickly looking, malnourished, and diseased.  They do not have dog catchers here in Cuenca like they do in North America so the amount of stray dogs increases real fast.  There is never a day when you are out taking a walk that you don't see a stray dog every few blocks. Sometimes there are small packs of dogs wondering around the city of Cuenca. 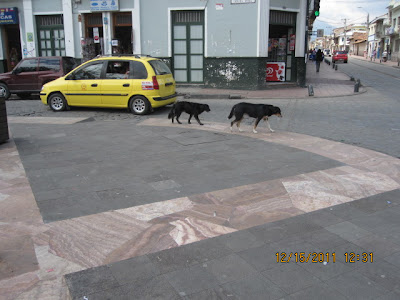 The good news is most of these homeless dogs are docile and weary of people, in fact they hardly ever come very close to people and they act like scared, mistreated animals. The bad news is there is a lot of dog poop on the sidewalks virtually everywhere in Cuenca. This can make Cuenca seem unclean and dirty. The problem is these dogs don’t belong to anyone so that means no one is going to clean up the dog poop either, so it piles up.

Ecuadorians have pets here, mostly big guard dogs (German Sheppard’s) locked in their gated fenced yard and these dogs are all trained to attack. It would not be good if one of them ever got loose. When you’re walking on the sidewalk too close to the fence sometimes these big dogs will jump up to the fence and ferociously start barking at you and if you’re caught off guard it can be scary.

They have a much different attitude about stray animals here than in North America.  Ecuadorians have pets mostly for guard dogs, not for companionship. So in that respect it is one of the reasons why you see so many stray dogs on the streets. Stray dogs do not get the attention from people here like they do in North America. Besides that, dog food, vaccinations, and vet services cost money—money that many Ecuadorians are not going to spend on a dog.

We have not seen any dog homes, animal shelters, kennels, or animal adoption agencies here like they have in North America. With the expat community increasing this should change and then some of these dogs can get off the street. If any Ecuadorians are reading this and there are such places in Cuenca please comment and let us know where they are located in Cuenca, and if there are animal shelters or dog catchers then why are there so many stray dogs on the streets?

We have read stories on blogs written in 2009 where the city of Cuenca was going to start picking the stray dogs up off the streets and euthanizing  them, but since living here we have yet to see any animal catchers. The stray dog problem seems to have gotten worse just in the 7-months we have been living here.

UPDATE: November 2012.  We just learned there is a nice lady and her family from Portland, Oregon, along with several volunteers, rescuing stray dogs on the streets of Cuenca and hopefully giving them loving homes. We have noticed a big change in the amount of stray dogs in Cuenca and now we know why. Thank youfor your good work! The program is called ARCA dog rescue but I could not find a webpage for them.

Along with a lot of stray dogs comes incessant barking at all hours of the night or day. We haven’t yet met an expat that has moved here, no matter where they live, even in high rise condos, that hasn’t complained about the noise of barking dogs. When we first moved into our house the barking dogs were keeping us all up during the night and then waking us up in the middle of the night. Fortunately, we’re used to the barking now and sleep right through the barking dogs!

Perhaps there is someone who is considering moving to Cuenca who may actually have the extra time, inclination and the love for animals, and the money to boot to want to help with this growing “stray dog” problem here in Cuenca. We think you’d be well received by the expat and Ecuadorian community for your efforts in finding homes for these stray animals or at the very least, putting these animals down. This may seem cruel, but putting the dogs to sleep would be far better for them than having them roaming around feeling sick, unloved, malnourished and a lot of times diseased.

It will most-likely be an expat couple or a group of expats who initiate change in this area and who will eventually work towards finding a solution to this problem before anything actually begins to change for the better. Perhaps that person or couple is you.


UPDATE: November 2012.  We just learned there is a nice lady and her family from Portland, Oregon, along with several volunteers, rescuing stray dogs on the streets of Cuenca and hopefully giving them loving homes. We have noticed a big change in the amount of stray dogs in Cuenca and now we know why. Thank youfor your good work! The program is called ARCA dog rescue but I could not find a webpage for them.