This article was first published on January 25, 2012. Today we bring you the updated article and the video to go along with it.

UPDATE 2018: Everything in this article still applies. House Hunters has done three shows in Ecuador since writing this article, that we know about.


Last week House Hunters International asked Frank and me if we would like to be featured on one of their shows doing an episode about house hunting for rentals here in Cuenca.

This version of HHI is a spinoff of the house hunters show. It was pretty exciting to be asked to do one of their shows and we gave it some careful thought. But we are not the type of people who just jump into something without doing the due diligent research first. What would the consequences of such a move be? 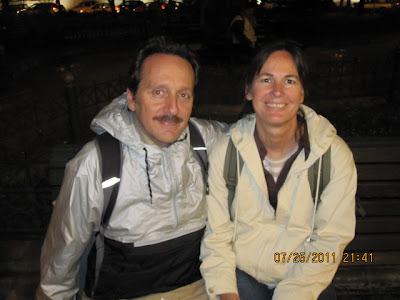 We did our research and investigation about this show and it is a very contrived reality show. Viewers do not realize that when they watch this show the people in it our actually “acting”! But that is not the scary part, the scary part is how they can and will slant anything they want from the four day shoot into their favor and say and do whatever they want. It's pretty much like watching the news or reading the newspaper. Is that what you want? we don't think it is. As our readers already know, we have our own show already.

Update 2018: In fact during the considerations we called them several times with our questions and they said we had to stick to their script and that's when things began to fall down hill from there and is why we decided not to do their show.

We have a reputation to uphold for our readers and YT viewers and for ourselves and we feel it will do more harm than good. We have a pretty large readership now and our readers truly have an expectation from us, and we believe we owe our readers the low cost Cuenca, not the hyped up Cuenca with inflated rents.

HHI is a very popular and well-known cable television show and for us to go on this show and pretend we like the hyped up rents and real-estate prices would be contradictory to what we teach people about how to live in developing countries.
We believe that if we were to go on this show it would inflate rental prices even more and that is something we are not willing to do. We cannot stop others from hyping up Cuenca with high priced rentals and real estate prices, but for us it is not an option. We love being the Frugal blog about Cuenca and we love being able to tell our readers about how not to be a gringo target and how to find good rental deals.
We live in a pretty nice rental now for only $250 a month and we know there are other rentals out there in the local rental market as well. If we were to go on the show we would be asked to look at high priced rentals that are actually out of our price range and that is not who we are.
This is how the show works and why we won’t do it: They open the show up with how we moved from the U.S all the way to Cuenca to make a new life for ourselves. Then they show us three rentals in Cuenca, one being the home we are in now. They take everything out of our house and pretend like it is just one we are looking at to possibly rent. We would be expected to act the whole time. (If it were our show our slant would be how to find three nice but economical houses or apartments between the price ranges of $250 to $400. We would want to talk about the three factors to look for when searching for these rentals. And the three things not to look for when finding these rentals)
The shows slant would be to show us expensive, gringo inflated rentals that in reality we would never consider in a million years looking at or telling our readers about. They would get a very popular real-estate agency involved like Caldwell Banker or Remax, both of whom are actually here in Cuenca and they would show us $500 on up rentals. Frank and I would have to “act” like these overpriced gringo rentals are something we would consider renting. Of course, in the end we’d have to say they are not really in our budget and we choose the $250 rental, the home we’re really in.
The bottom line is the show is really contrived and artificial, which is nothing like our videos we already have on YouTube. The videos we make for our viewers are never rehearsed—what you see is what you get…To see us on television would be like watching two people you already know and have become accustomed to seeing on YouTube and then be expected to not really know them once you saw the show. We know that are readers would be disappointed and we’d probably lose much of our devoted fans if we did the show.
You see, we already know that if you do your due diligence you can find a decent rental at the local prices of between $300 and $400, unfurnished. At least at this time in Cuenca. Things are changing, however in that area but we do not want to have any part of that new change. Prices are going up, yet we still rent for $250 per month.
Anyway, in the end of the show we would obviously pick out the house we are in now as the one we choose. They pretend like its 3 months later and they put all the furniture back and they show how we have adjusted to our new home, ladda, ladda, ladda.
We want to know what you think. Are we making the right decision by forgoing doing House Hunters International, or do you think we should do the show? What you think means a lot to us—we wouldn’t have this blog if it wasn’t for our devoted readers. You can leave a comment at the end of this post, or email us directly and tell us your thoughts.


Update 2018: As our long time followers know, we have now lived in three different houses, in three different locations of Ecuador and have never spent more than $300 on 4 bedroom houses, and we do not intend on doing anything of the sort for a long time.

Stay tuned for our price update about the cost of living in Cuenca Ecuador for 2018! You're going to be surprised. Here's the DIY Cuenca Landing Guide!
Posted by Discover Cuenca Ecuador at Thursday, September 20, 2018
Email ThisBlogThis!Share to TwitterShare to FacebookShare to Pinterest