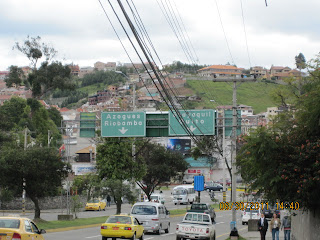 When we talk about city-center or downtown area of Cuenca we mean just that; living away from the city-center does not mean you are not in Cuenca anymore. Cuenca has about 450,000 people, it is not that small. The colonial city center of downtown is about a 2 mile by 4 mile radius. Living away from this radius is where you will find “local” priced rentals, although you’re still in the city of Cuenca.
BTW, there is also an area close by Supermaxi, off of Avenida las Americas and Grand Columbia, that is also VERY expensive (it’s where all the gringo high rise brown brick condos are located) so if you don’t want to pay U.S rents in Ecuador, stay away from that area as well.
Below are 10 benefits of living outside of the city center of Cuenca.
1. Waaaay less smog: Downtown cuenca is full of auto exhaust, and it’s pretty bad. We know of one couple who left their beautiful apartment with a nice view of the colonial area; they are an older couple (worse for older people and especially those with lung or health issues) and they felt that breathing in the exhaust every day was detrimental to their health. And they are right. They moved to Vilcabama, EC. 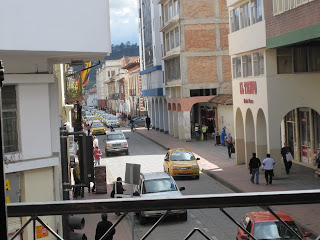 2. Outside the city center you can flush your toilet paper down the toilet. In old colonial Cuenca, which is the city center, putting your toilet paper in the toilet is a no-no. You know, like when a baby sticks their car or baby doll in the toilet and then flushes, that is what’s going to happen if you put too much toilet paper down the old plumbing in a colonial building. In the buildings in colonial Cuenca you put the toilet paper in the waste basket. Ugh!
3. Rentals cost waaaaaay less dollars. The same amount of space you’ll get in a downtown colonial apartment you can get for half price, ten minutes away by taxi from the city center, plus it will be a newer building. Not living in the downtown area will be your biggest savings by far on your monthly cost of living. People just don’t realize that prices have sky-rocketed in downtown Cuenca. We have real-estate agents telling us they don’t have any rentals less than $600 now in the city center.
(If you do hear of someone renting for less than $250 downtown it is because they rented it a few years ago or it’s just a studio apartment.)
Even so, understand you can still get taken advantage of when renting away from the downtown area, if you allow it. But at least once you’re out of the colonial district there are still local-priced rentals out there, you just have to keep looking and asking around to find one. 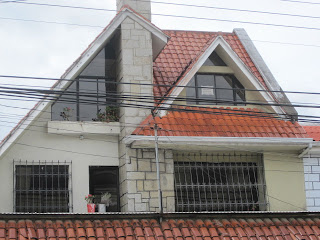 4. Waaaay less noise pollution: away from the downtown area there is a lot less noise and congestion, unless you are living right on a busy road like Avenida las Americas. There is a lot of heavy, loud traffic piled up in the downtown area, and is another reason there is so much smog pollution as well. In Ecuador they like to honk their horns a lot…and they are loud horns.
5. Learn Spanish Quicker: the best way to learn anything in life is “hands on” and in the case of learning a new language, total immersion. Conversing with shop keepers, landlords, restaurant owners, people on the street, etc, will in fact help you to understand the language much faster.
Going to gringo run agencies, restaurants, and shops will keep you segregated from the community and the culture, is that what you want? The Ecuadorians will respect you more for trying rather than saying “no hablo espanol.”
6. Historic center will still be a neat area to visit while living in Cuenca: The old colonial downtown is really neat, no doubt about it; and it still amazes us the beautiful architecture and everything about it. But the question is if we lived downtown in an old colonial building would the downtown area still be neat and special to us. Probably not. The fact of the matter is, we can walk downtown from our house in 30 minutes and we can take a bus in 15 minutes and go to the city center whenever we want. 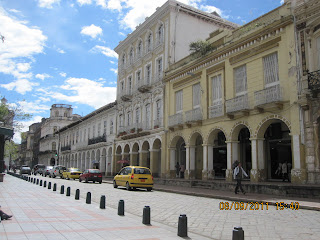 7. Four rivers in Cuenca: The river and views is not just downtown Cuenca. There are four rivers that surround the city of Cuenca, so virtually pretty much living anywhere within the city you will have a river near your home.
8. The mountain views are better away from the city center area: If you like to look out your window and see the Andes Mountains the views seem to be better outside the city center; this could be because you are closer to the mountains when not in the downtown area. The tall buildings downtown also tend to block the mountain views a lot of the time, depending on where you’re at. 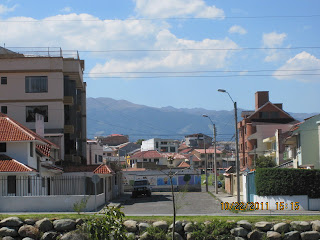 9. View of the colonial downtown: Have you ever seen the magnificent view of the colonial city center? Well, you can’t get that view if you are a part of that view, meaning living in the city center. Living even just half way up the hill gives you that view without the smog and noise pollution. Ironically, homes are not more expensive when you live in the hills of Cuenca like they are in North America. 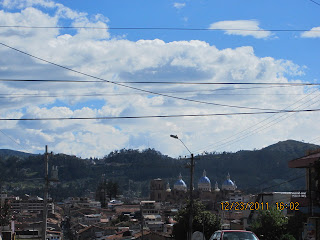 10. Big North American Style Grocery Stores and Mall Del Rio:   The North American style big grocery stores are away from the historical center, giving you more choices and more variety.  The mall is definitely not in the center.   So no matter how you look at it, if you live downtown, if you want to go grocery shopping you’ll have to take a taxi or a bus. 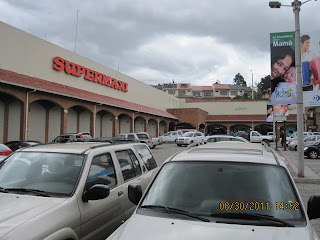