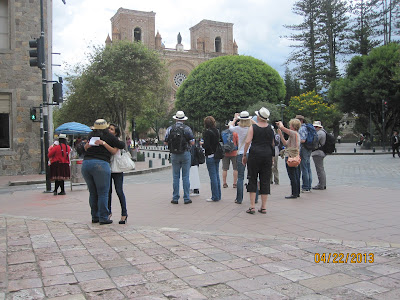 Why would one choose Cuenca Ecuador over Hutchinson Kansas?

Here's why we chose Cuenca

Let’s talk about weather…Not only has Frank been a good provider by producing much of the food we eat back in the states, but he actually has a need to play in the dirt on a fairly regular basis.  It’s how he keeps his sanity i.e. balance and gives him a reason to get out of his computer chair. It’s a much needed hobby and a way to provide fresh wholesome food.

However, in Hutchinson, he’d be fighting the winter weather – actually more like sleeping through it as far as gardening is concerned—and the summer weather also.  All work and no play makes jack a dull boy, and that’s how he feels in winter and summer extremes.  The allure of being able to play in the dirt all year round is just too hard to resist.  In that sense, what some would consider sterile weather patterns is actually a boon.  That’s a very strong real pull, not some superfluous reason.  Ecuador wins.

…And culture…We’ve written before about Ecuadorian family culture.  Family is the second priority in life for us, after God, and while we did have a couple of friends in Hutchinson that have the same values, the rest of the culture does not.  This is not being said to offend anyone, and we apologize if that is the case.  Long time readers know we have a reputation for telling it like it is, and that’s why they keep coming back to this blog.  We still cannot help but feel a feeling of amazement and contentment to be riding on a bus in Cuenca and be surrounded by children, brothers and sisters together with their parents right there on the bus and everywhere we go.

Many Ecuadorian people on the street smile at us, and one day a family in their Toyota forerunner stopped on the street as we were walking just to shake our hands and welcome us.  In Hutchinson, we’d just be another person to ignore like everyone else.  That is also very real for us and not a superfluous reason.  Ecuador wins.

…Cost of living…Cuenca and Hutchinson line up very well on the cost of living issue.  Some things are a bit higher in Hutchinson, but this would be mitigated by the much wider availability of used items at goodwill stores, swap meets, craigslist and online auctions which we used to actually enjoy participating in.  Another hobby that not only pays for itself but provides for abundance on a small budget.

The allure of having a maid, cook and gardener in Ecuador is a strong pull for some, but we don’t really want or need people waiting on us hand and foot, creating a kind of idleness of spirit, it would take some of the enjoyment out of life.

The ability to run a micro business in Hutchinson, such as home repair, painting, carpet cleaning, buying and selling used items, sewing, cleaning, etc. in order to supplement your income should not be overlooked.  These would be practically impossible in Ecuador.  This could make all the difference financially speaking for some.  And the lack of availability of large chain stores like Lowe’s, Home depot and Wal-Mart is a sore spot here in Cuenca.  So it looks like a wash on this one between Hutchinson and Ecuador.

…Ambiance/environment…There’s no denying it.  Especially the historical district, Cuenca feels like you’re in Disneyland.  If one has an adventuresome spirit, the differences in ambiance can be a welcome change and a medicine for boredom.  If you can laugh at things and remain flexible in your attitude, you can enjoy all that the culture has to offer, something you can’t do looking out of a window of a condo building however.

In that sense, Hutchinson can seem, well, a bit small and boring.  But again, not terribly so, especially if you enjoy everything else about it, and can keep yourself entertained, especially at the library.  For us, Cuenca wins on this one…

And last but not least...Politics... this is a hot button topic and it's important to say that our position is A-political.  Just like in biology class, we learned of beings that were A-sexual, i.e. reproduced without sex, we reproduce without politics. (joke) We don't care to discuss political parties and argue politics with people. We don't participate in politics.

Having said that, politics stink to high heaven in the u.s. unless that is, you're within the class of politically correct, highly exalted groups that subsist on benefits from those politics. In that case, politics for you are sweet.   Translation:  politics exalts one group while vilifying another group.  It pits people against one another.

Politics is what's happening when a seemingly nice person comes to your house and is nice to you, and then they make public statements that they don't agree with you.  You can always tell a political person, they are looking at you through their political spectacles.  Politics creates smoke screens, and smokescreens create confusion.  A confused person always says no--to the truth....that we should be spending our time loving one another.

In that respect, it's nice to be in Ecuador and away from all the noise.  There has only been one case of attempted political dialog here in Ecuador by Ecuadorians.    It was when myself and another gringo got into a taxi.  The taxi driver asked us if gringos are a proud people and if we were pro current administration.  I proceeded to adamantly explain that we don't get involved in politics.  We say no to politics.

Please, if you are trying to be our friend, leave your politics at home.  Just say no to politics.   Here  in Ecuador at least, we're not surrounded by all the noise, that is, as long as we don't turn on yahoo news.

To see part 1 of this article click here
Posted by Discover Cuenca Ecuador at Saturday, March 31, 2012