Ecuadorian Paradise, Land of Contrasts: LOVE It or LEAVE It! Update 2016

Update 2016- Remember, we live here but that doesn't give us any good reason to leave out all the tidbits and details, does it? We think newcomers want to know that some public banos come without the toilet seats. 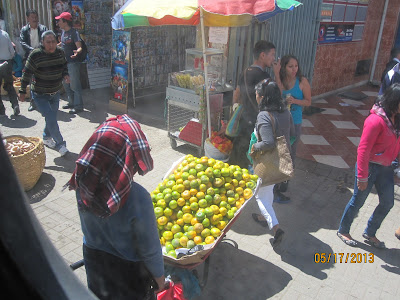 In this place referred to as the earthly paradise of Ecuador, or “retirement haven”, there are so many contrasts. And I’m not talking about little insignificant things.

Where Have All the Toilet Seats Gone?

Well, I was walking around the Cuenca mall the other day marveling at the amazing new commercialization of a third world; nice new stores everywhere, great lighting, nice plants, expensive shoes, etc. and then oops, what happened to the toilet seats?

Somebody please tell me how much does it cost to put up a mall? My son’s guess is $25 million dollars. It’s not an educated guess, probably much more. So, was somebody trying to save a few pennies by leaving off all the toilet seats in the restroom? And what about the toilet paper rolls? There are no toilet paper rolls in the stalls either; you have to get it all at once before you go in. Your calculations can be over but you won’t want to be under…
This is not some dusty dive in old town. This is a big time modern commercial mall and the place otherwise sparkles.

UPDATE: September 2013: Guess what? Went to the Mall Yesterday and used the little girl's room and they have toilet seats now! Yahoo!!

Update August 2014: I don't know what is going on but the toilet seats are gone! I guess they took them off. Want to hear a rumor? Of course this is all speculation but, here goes. Someone told us that there are no toilet seats in the women's restrooms because they tinkle on the seats! LOL...and the cleaning lady or cleaning man does not want to have to keep cleaning the toilet seats. LOL. This could be correct as our favorite ice cream joint, Tuddo Freddos does not have a toilet seat in the ladies room either, but the men's room does have a toilet seat. So you figure this one out. Let us know when you get it figured out and we'll post it.

Update 2016 - Toilet seats were put back on and they have remained on the toilets for sometime now, so we think the seats are there to stay.

I keep pondering what the reasoning might have been when the plans for this mall were being drawn, and how come nobody noticed while it was being constructed? Maybe it was intentional? Well if you were to judge by the fact that the food court prices are three to four times as high as outside of the mall you wouldn’t think it was a cash flow problem. Oh, and while I’m on a roll, how come the janitor (in the men’s room) is always a young woman? Am I just modest? Because even after a year I’m still not used to that. Riddles of riddles, keeps my mind active. My sense is that there’s gotta be a good reason.

Saved by the Ecuadorian Lady

Ecuadorians are some of the nicest people I have ever met on the planet, besides those in the south USA. A perfect example was when an Ecuadorian lady told the other lady that cut in front of us in line at the grocery store, -- that we – the gringos, mind you - were in line first. I was totally amazed and let out an uncontrollable smile. This I would have never expected. What a welcome surprise, and just when I was getting worried that I might have to say something to the cutter myself. Do I risk the ugly American label? No, I was saved, by the nice Ecuadorian lady.

Update 2016 - Ok, ok, we speak Spanish but maybe our accent is too gringoish because once in awhile we get someone who curls their eyebrows, which we understand to mean: "Uh"...are you trying to talk to me in my native tongue; because you're not making any sense". This goes on and on for at least a full minute. We go to the next stall and they seem to understand us just fine.

The Dark Side of Year Round Spring Weather?

We’ve all heard the story of the perfect weather in Cuenca, which is why I find it interesting that nowadays the retirement press seems to have toned it down a notch. I keep seeing this new terminology, “moderate weather” now, instead. But nobody says anything about the mold. Well, when there’s not enough sunshine, and plenty of moderate weather, throw in lots of rain, you get…Mold. Cuenca is a moldy city. We noticed this while doing a humidity experiment, since we’re normally healthy as oxen but for some reason, not in Cuenca. Not for the faint of heart.

And Then There’s the Wall

What’s your beef? I hear you saying. Look I enjoy moderate weather just like you all. I love walking around and looking at the pretty trees with their bright colored blooms of yellows and pinks and reds. They are so wonderful to look at, unless you’re walking by any of the several urine soaked walls around town. Kinda overwhelms the blooms, know what I mean? It never ceases to amaze me how I forget to repel myself all the way to the other side of the street when I’m coming up to a wall. Ahh, paradise, it’s easy to forget you’re not in it when walking around in the retirement haven of Cuenca Ecuador.

Update 2016 - We veer away from the areas (near Mercados mostly) that were well known for this. Frugal family rarely shop at the Mercados anymore. Just goes to show, being frugal is not the same as being cheap. We've decided to skip the smells, thievery and gouging and spend more on groceries at the regular grocery stores. Aaah, compromise in paradise.

Of course nobody moves across continents just to look at spring blooms and to enjoy moderate weather. Yes, it’s all about the price isn’t it? Throw in a lower than where you live price and that bakes the cake. Unless of course, you don’t speak Spanish and you consider paying more than the locals, just an inevitability, like death and taxes. Oops, somebody told me the other day that some “Jesus” guy had said long ago he conquered both of those. Now there’s an odd thought. But for us mere mortals, we should just “suck it up” and pay the gringo tax, right? Those of us that don’t come from the perimeter metro areas of the northern country will find prices the same or higher than back home. They’re softening the blow; they’re calling it “sticker shock”. Should we stay or should we go?

Update 2016 - There's so much to love about Cuenca that we'll stay and just walk away! As you probably know, we walk away a lot!

Helping folks figure that one out has become somewhat of a specialty of ours, and it’s a popular one at that, judging by the nice folks that write us privately to tell us so. There are some quirks to bargaining in paradise that we had not previously been aware of. We give it all away to the owners of the Do-It-Yourself- Cuenca Landing Guide, as a show of thanks for your support.

Some people are flabbergasted at the thought that anyone would want to leave the freest and best countries in the world for some third world so called paradise. Is that for real? You’ve heard the school of thought that says “happiness is within you” or “the kingdom of heaven is within you” i.e. you take yourself and your attitude with you wherever you go. Home is where the heart is, blah blah blah, well you might want to bring a bit of rhino skin with you. It will help when you’ve been waiting weeks and then months for the cover plastics to come in for your new Ecuadorian Paradise identity card. Oh yeah, those finally came in, but don’t leave your rhino skin home just yet, I’m almost certain by next week it will be something equally suspenseful… gotta run, the sun is shining…

Update 2016 - Once you have your i.d. emplasticated, you won't have to worry about it for another ten years.

Until we write another "real life" report from paradise, check out these articles about one of the best cities to live in the world.

We're an expat family of five. We live frugal, healthy and happy in Cuenca Ecuador. We travel when we get a chance to and we record all of our experiences and adventures. Come along with us and enjoy the fun!

Posted by Discover Cuenca Ecuador at Saturday, May 21, 2016
Email ThisBlogThis!Share to TwitterShare to FacebookShare to Pinterest