Update 2016 - Hello folks, we have another updated article for you. With this article EVERYTHING we said in it four years ago, July 2012) still stands true today, the only really new update is we think more expats are renting and checking out Cuenca with a fine tooth comb FIRST before investing in real estate. There's been far too many scams going on abroad with gringos rushing in without doing their due diligence research first.

Ecuador has been referred to as one of the lower priced retirement havens on Earth.  So then, why does it appear that a lot of people that are moving here are overqualified?  Judging by what we’re seeing there’s a lot of people coming to Cuenca Ecuador that could easily be going to a lot of other places, why go to the least expensive retirement haven on the sales pitch of the retirement press?  Well duh, it’s cheaper, I hear you saying. Or is it?  Please follow me on this.

Update 2016 - Is property cheaper in Ecuador? Well, that depends a lot on where you want to buy and what condition the property is in. Lots and land is out of this world for a developing country!! Cuenca's market is higher than many towns its same size in the U.S. Why do people keep saying the real estate prices are cheaper in Ecuador for? All a person has to do is some online research to see it isn't true.

The very first real estate book I ever read (are we talking about real estate again?) was William Nickerson’s “How I turned $1000 into a million in three years” and if memory serves me right, it came out in the fifties.  That was a long time ago, so forgive me if I don’t remember correctly, but it seems that back then in the book he spoke of income to real estate ratios, and I think it was 25%.  That is, if someone was making $25,000 a year they could theoretically afford a $100,000 house.  Those figures changed through the decades and the amount of indebtedness that North American families took responsibility for.

Eventually people took on more and more debt and the amount of house they could buy was only three times their incomes.  Research shows that the historical average median affordability number for the U.S. has been 2.7 times income as an average. i.e. multiply household yearly income by 2.7 and that’s the maximum affordability ratio under safe lending practices. This is just a median figure, so Donald Trump types don’t fit into this equation.  This was before all the recent banking scandals of course, where people that really couldn’t afford the housing were put into brand new super expensive housing with practically no money of their own.  The affordability ratios were quite skewed to the upside during that period.

Relating this information to Cuenca Ecuador, my son was on a Cuenca Ecuador newspaper yesterday, looking through the jobs section.  He tells me there are job offers for Ecuadorians with accounting degrees starting at $1000 a month.  Some of the higher paying jobs were for $1500 a month.  This is obviously the higher end of the pay scales for the well educated folks.

That’s the maximum that the higher earning families would be spending on housing according to this example.   Remember folks, that’s the maximum affordability for the higher income earning households here in Cuenca.  This article does not even begin to address the “median” income earning households, although we have written some such figures previously on this blog.  Too, professionals such as doctors and accountants aren’t going to live in mediocre housing, so I have to believe that you can get a pretty nice house for that.

A couple of weeks ago I got an email from a reader asking for contacts to see houses up to $150,000.   He had never set foot in Cuenca Ecuador before.  I hope you’re starting to see a picture here.

Can anyone spell, BUBBLE?  It looks like this, G-R-I-N-G-O.  This article is in no way intended to offend or degrade.  It is meant to inform, and if just a few gringos avoid getting stuck into real estate they can’t later sell to a greater fool, then I’ve done my job.  Oh, I realize that some that get in early enough may make some money off their real estate when they sell.  But that’s speculation.  Are you a seasoned speculator?  Or are you just gambling?

Remember when we were in Salinas and we were asking the (gringo) real estate agent to show us the beachfront penthouse condo?  Well guess what, she was also touting (because we did not ask to see…) a few “other” used condos owned by gringos that needed to get out of their high priced real estate.  You gotta love these gringos.

Update 2016 - When we first visited Salinas in the winter 2012, property prices in Salinas on the Malecon were already somewhat high and now Salinas real estate market "on the Malecon" has almost doubled in price, and...the area the gringos love called Chipipe Beach has also skyrocketed. For an example (wish I would have made a screenshot): in Chipipe you could buy in 2012 a four bedroom three bath house (not on the beach) maybe one to three rows back for $75K. Today that same house is $180K.  Chipipe rents and real estate prices are almost comparable to Panama's now. Take a look at this small 1 bedroom, 1 bath 109M Casita, asking 160,000 dollars. Whose buying this stuff? 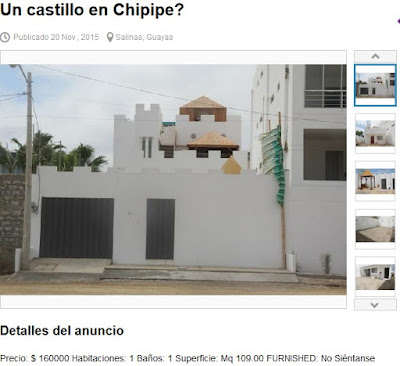 Two to three rows back from the Salinas Malecon in 2012 you could get a fixer upper house for $25K (seriously) and today (not sure if it is fixed up or not but,) these VERY SAME houses go for $65 to $120K. These homes are nothing special, older homes with out-dated 70's green tiles on the bathroom walls, maybe 140M, three or four bedroom, no green space but a small lot, maybe what they call a "garage", which is actually some tiles. It would need updated and remodeled.

If we were going to buy property in Ecuador, we would first, get to "know the market" and when we found something we liked. we'd make a reasonable offer that coincides with market prices before all the foreigners came. This takes several days of research both online and on the ground but is well worth it in the long run.

Buy property because you want to live in the home and in the area, not because you want to turn around and make a profit...there is already too much of that going on. The markets in well-worn expat areas of Ecuador are already over-priced and that means you might have a hard time getting out. 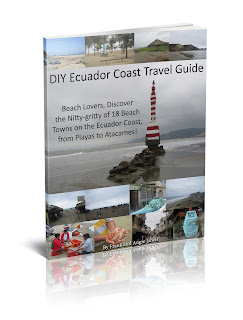 our latest updated version of our DIY Cuenca LandingGuide has just been published.  And we go into more detail about the Cuenca real estate market in the book! It's still possible to find a deal in Ecuador but not in the tourist areas. Avail yourself of the latest information on how to save money and go local in Ecuador.  The DIY Ecuador Coast Guide also has a lot more detail about the coastal real estate market as well.

If you liked this article then you will probably like these too.