In Ecuador You Can Jay Walk… 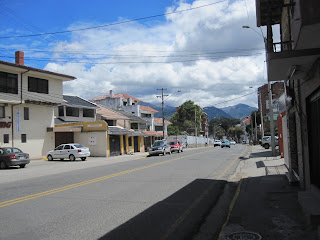 In Ecuador you can jay walk...
…all you want and no one cares. It may not seem like a big deal if you don’t do a lot of walking, but if you walk a lot taking a quicker way by crossing the street where there is no crosswalk saves valuable time, especially if you’re in a hurry for something. Be careful though because in Ecuador pedestrians do not have the right of way. The traffic here in Cuenca is hurried, noisy, and busy.

UPDATE NOVEMBER 2014 - They say that they will start enforcing the jaywalk law in Cuenca by fining people who do it, however we have not seen this to be the case as of yet...just a heads up for those who will be moving here in the future. Things are and will be changing, it always does when a city becomes popular on the world map.
It may seem odd that pedestrians do not have the right of way here but it is just the way this country is. You’ll just have to see this for yourself when you get here. The other day on our way to a meeting up with some expat Christian missionaries from Belgium the wife would keep walking right out in front of traffic downtown! At one point I had to grab her and pull her back from the traffic. She truly thought they were going to stop for her, even though she was crossing at a crosswalk. Apparently it is acceptable to walk out in traffic in Europe where there are white pedestrian stripes in the asphalt.
If the lights green at a crosswalk it would seem it would be ok to walk, right? Nope. Oncoming traffic that is turning will honk their horn to let you know, “don’t walk, I’m turning”. So when walking in Ecuador, be watchful and listen for those beeping horns.
Funny thing is though, we see less fender benders and car accidents in Ecuador than we did in North America. This could be because Ecuadorians must participate in a six week driving school before they can get their license, and most of the drivers, even though they speed at times, and seem in a big hurry, are actually good drivers. Ecuadorians have fast reflexes, which is needed here when everyone kind of drives all over the road.
And that’s another thing, people drive in both lanes at one time; yep, the traffic seems to be pretty chaotic here but it is actually organized, or should we say, organized in its own fashion.
We’ll talk about this more in another “In Ecuador You Can…” series.
Posted by Discover Cuenca Ecuador at Tuesday, July 24, 2012