Why I Won't Ride a Motorcycle or Bicycle in Cuenca Ecuador 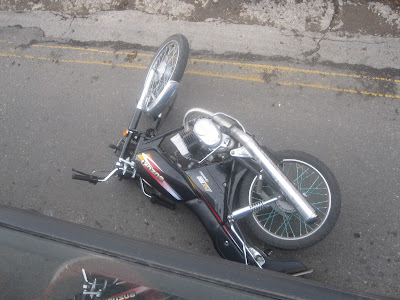 The bus driver swerved into the right lane and sideswiped the guy on the motorcycle. It could have been fatal but luckily the cyclist was driving defensively, saw the bus, and was able to only get sideswiped, and he and his bike crashed to the ground.

The motorcyclist slowly got up from the pavement, took off his helmet, and slowly limped to the door of the bus. We thought he was going to yell at the bus driver, or take down information... and well, you know everything you would do in the US had you just been hit by a big "something ton" bus while you're on your bike.


The motorcyclist is the guy on the right 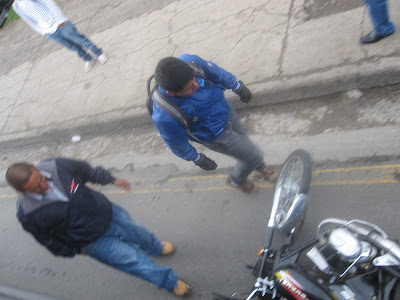 Instead the guy just said to the driver in loud Spanish, "what's going on? Didn't you see me?" We couldn't hear what the bus driver said back to the motorcyclist because the music on the bus was really loud. The guy simply went back to his cycle and someone got off the bus and helped him pick up his bike and the bus drove off. 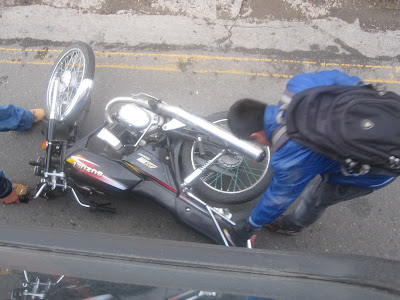 Lately, in the last few months we have seen more cops ticketing drivers who are driving too fast. Hopefully this will help curb some of the traffic accidents that Ecuador has. However, all this new police activity, did not seem to bother this bus driver and prevent him from driving erratically and almost killing someone.

In 2010, there were 50,000 accidents in Ecuador, which killed 2,500 people and 15,000 were seriously injured, while already this year the country has recorded 5,160 deaths from traffic accidents. Read the full article here.
Posted by Discover Cuenca Ecuador at Friday, October 05, 2012