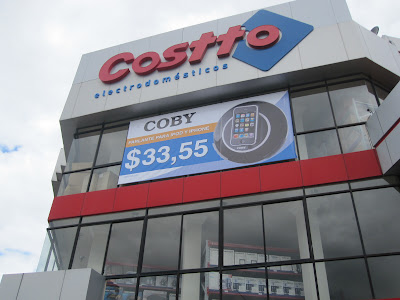 Costto is sort of like Cosco but without as much merchandise. It has three floors. First floor is electronics, appliances, and automotive and the second floor is household, kitchen items, and the third floor they're still working on. They don't sell bulk foods either. Still, there were a couple of things in this store that were better priced than we've seen elsewhere in Cuenca, such as the Black and Decker grill and griddle which comes in handy when you have a lot of mouths to feed pancakes We've seen the Black and Decker pancake griddle for the same price at Coral but without the grill apparatus. The Oster griddle is $97 at Coral. Overall the prices at Costto seemed to be the same or even a bit more than we've seen in Coral Centro in Cuenca.

Posted by Discover Cuenca Ecuador at Tuesday, January 22, 2013
Email ThisBlogThis!Share to TwitterShare to FacebookShare to Pinterest