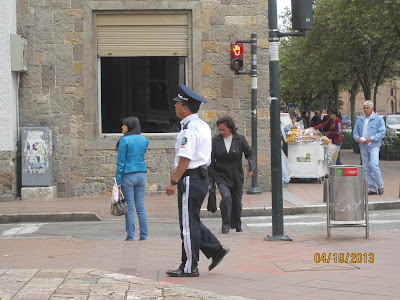 In a recent news article in the El Mercurio, dated April 16, 2013 it was reported there is now 110 new police units in the municipality of Cuenca. We’ve seen these new police men and women all over Cuenca and they seem to be pretty busy directing traffic and pulling speeders over and other drivers who are not following traffic laws.

The article states that 25 units are on bicycles, 20 units patrol Cuenca on motorcycles and the rest are in new 4-wheel drive black police vehicles. The first thing you’ll notice about these new police is they dress much like the police you see in the northern country. They wear a white short-sleeve collar shirt; black pants with a big broad stripe down the side, and of course their matching black police hats.

Traffic congestion in the city of Cuenca is terrible and unfortunately most drivers in the city drive with their horn rather than Ecuador traffic laws which makes it difficult to cross the street, or ride a bicycle; its really pretty bad. The big change you’ll see with the new Cuenca police is they actually help pedestrians cross the street by stopping traffic!! And that’s a good thing.