Nitty-gritty of Cooking with Propane Overseas - Pros and Cons

Is it true that cooking with Propane gas makes the food taste better? Some gas range users say it does. We’ve also heard that camp fire coffee taste better too. We don’t know about that, but what we do know is using gas burners does seem to cook the food faster/better in the pan than when we use electric burners; probably because the flame is spread out more uniformly than our electric burners.

Pros of Using Gas for Cooking 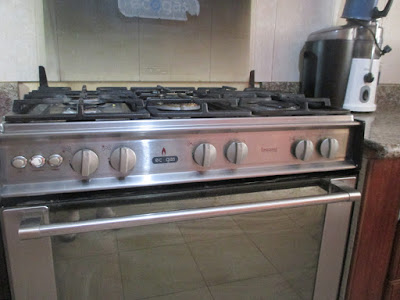 One of the greater advantages of cooking with propane gas here in Cuenca Ecuador is that it’s much more energy efficient than electricity; We’re a family of five and we cook a lot and we still have a difficult time going through a tank in a week. Did I mention that a gas tank cost $2.50 to refill?  I actually do a lot of baking as well, so you can understand how cooking with gas can be a great energy saver.

Cook When Electricity Goes Out

The other advantage about owning a gas range is, if and when the electricity goes out, you can still use the stove and oven to cook a meal.  The electricity is certainly known for going out here in Cuenca Ecuador, so this is a great advantage to those folks who do a lot of cooking.

Cons of Using Gas for Cooking

Cooking with gas can be dangerous. You do need to be conscientious about what you are doing at all times. Having your mind on something else while you’re cooking can be hazardous.

Let me tell you what I did a few years ago.  I turned the oven on, thinking it ignited the pilot light and for a full five minutes I thought the oven was on when it really was not, which means it was leaking gas into the atmosphere.  I went to put the bread in the oven and that was when I noticed it was not on. Of course, when I had realized the oven wasn’t on I, immediately turned off the knob and began airing out the kitchen, opening the window and the door that leads out to the patio. I waited a full ten minutes before turning on the oven again!  Now I ALWAYS make sure it ignites the pilot light by looking into the oven and seeing with my eyes it is lit. If you listen carefully you can also hear when it gets lit like a "poof of wind" noise.

This carelessness of mine ended up not harming anyone. But let’s say for instance someone in our home smoked and lit a match in the kitchen? Or what if, for some strange reason I never found out the ignitoer never lit and it continued to leak gas until it blew up our home, with us in it!  Or worse, we fell asleep and then wake up dead from the gas poisoning. (;-)

We have heard many scary stories from other expats using gas for cooking. We’ve heard of ovens blowing up and getting shoved several inches from the wall. The oven still works, miraculously. We’ve heard of burners being lit too late and the fire singing eyebrows and hairs on their arms…Using gas for cooking can be unsafe for normal, aware folks, so think how much more dangerous it is for folks who are forgetful and unaware of the dangers or of cooking with gas!

Gas Tanks Can Be and Are Often a Subject of Theft

Because the most expedient place to put the gas tanks is outside on a patio, to avoid possible gas leaking into the home and related problems, many people suffer the startling find of having been robbed of their gas tanks.  Many Ecuadorian homes have open patios to the outside, and sometimes thieves figure out how to access your patio in the middle of the night when you're asleep.  This happened to our neighbors here in Cuenca. 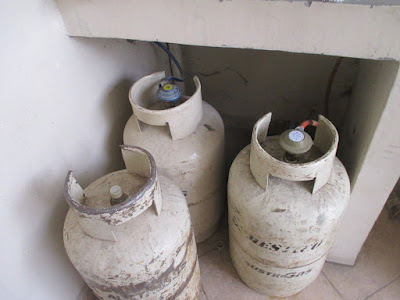 Switching Gas Tanks Can Be a Hassle

Houses (townhomes and villas) in Ecuador mostly do not have centralized gas in the homes or heat, so if you live in a house or townhome they all use the portable gas tanks for anything that uses gas in the home, such as shower, heaters, ranges, etc.   For one person or a couple it may take one to two months to use up a tank of gas for a gas stove top and oven.  Here’s some things you’ll want to know.
NOTE: For the reason cited above it is always a good idea to have a spare tank of gas just in case you do miss getting your tank switched out.
Note: For newcomers to using gas, we made a video showing how to attach the nozzle to the tank here and also explaining about the quirks of the “on demand water heaters”
This is South America and techs, repair people, furniture movers, and others have been known to come back and rob gringos blind, so it is just a preventive measure, nothing else.
If you are new to using gas for cooking, hot water, and heating your home, it would be a good idea to have someone you trust show you how it all works just to get yourself acquainted with it so you will not be overwhelmed; it will make your move abroad so much easier and hassle free.

To watch our videos about cooking, heating and showering with gas, click “Nitty-gritty Cuenca Living”; your questions are welcome so ask away.

Until we write again…
Posted by Discover Cuenca Ecuador at Saturday, August 01, 2015
Email ThisBlogThis!Share to TwitterShare to FacebookShare to Pinterest