Why Crime is Minimized in “So-Called” Paradises Abroad, Like Panama for Example?

Disclaimer: there is nothing in this article that is not already public knowledge on the Internet; we go the extra mile and dig deeper, putting it all together, helping people make sense out of the content that could be misleading people every single day. Sometimes we have to go beyond what’s just inside the box and look at what’s happening outside the box; we can do that because we have no agendas or vested interests.

Did You See the Big White Elephant in the Living Room!?

People have a tendency to “sweep things under the rug”, so to speak; we like to call it, ignoring the big white elephant in the living room”.  When it comes to crime in these pumped up cities abroad, even we got hooked in, just by reading what people are saying online. But we weren’t hooked for long.

Unfortunately Google Search has disappointed us, which doesn’t happen very often.  It just goes to show that they can have all of their fancy algorithms in place and cute little panda bears in tip-top shape and the search will bring up inaccurate content, like when you type in EXPAT SAFETY IN CORONADO PANAMA.

First, add this keyword phrase into Google: Are Expats Safe in Coronado Panama?  And this website pops up (Best Places in the World to Retire), and the first three positions in the search is this website; it’s like they have the whole crime market controlled by the real estate developers/brokers and tourist operators who are just about the only ones commenting about crime on this particular website.

You can either click here to go to the website or you can simply see the screenshots we took off the website to show you what is going on here.  Something is terribly wrong with this picture. Take a hard second look: notice anything similar about the commenters? Clicking on an image will enlarge it. 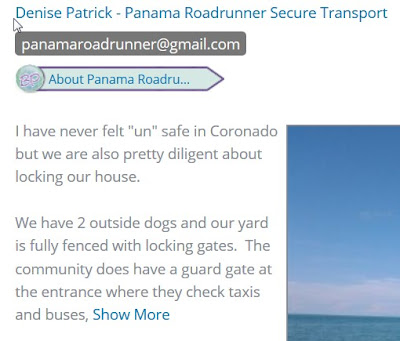 No such thing as “safer than the u.s.”.  The u.s. has many different regional areas some with way too much crime and others not so much.  Lumping the term u.s. when referring to say, Los Angeles, or Chicago etc. is misleading at best.  There are many areas in the Midwest and others that have virtually almost zero crime. 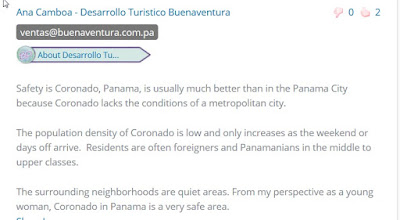 Did you notice anything about the commenters as a group?
Anyone can walk on the beach and enter into the Coronado community. It’s as easy as walking into a mall.

We know that if we were moving to Coronado community, we’d want to hear from people who DO NOT HAVE A VESTED INTEREST!!  What about you?


We did a bit more digging because Google really makes you do that to get the “real skinny about crime in Coronado” and found this from an ordinary expat, not a property owner, NOT working in the tourist or real estate business and here’s what he has to say, which puts things into better perspective. 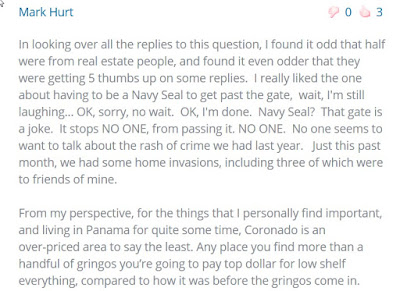 The reality is most expats will not go to page 2 of Google. And very few will continue searching once they read what the above website says.  So, here is many folks, looking to retire in Panama, still being mislead from people with vested interests. Folks, please do your due diligence and scour the Internet and talk to Panamanian locals that are not in the real estate or tourist services about crime.

UPDATE 2016 - LOOK, finally after we wrote this article someone finally stepped up to the plate and let it all out! Foreigners need to know this stuff. Make sure you enlarge the photo to read it. 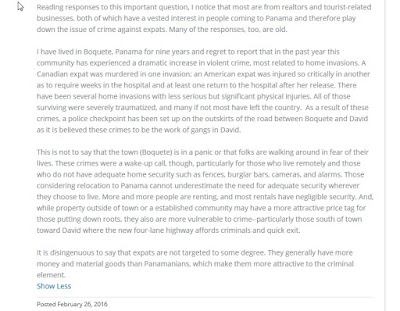 Here’s our story. Before we went to Panama on a scouting visit we did the online research just like anyone would, we went to the first three websites and read the same comments from that same website that we are showing you today.  We thought, “Oh Panama seems safer than Ecuador”!  After all, that’s what Google search is putting out for folks searching about crime in Panama in Coronado.

Seriously, we thought Panama was pretty safe going in from what people were saying and we walked around all over in “off the beaten path” areas of Panama City and we both felt uneasy in some of the areas, which is typical when you walk off the well tread areas. We asked several different people about crime in Panama City and there are two areas we were told to stay out of, even during the day. One taxi driver mapped the areas out for us, which is on another video coming soon.

One night while we were still in Panama, I decided to do more research than just the first page of Google and I ended up on the second and third page which brought up a lot of really horrific crimes against expats in Panama. Not trying to scare anyone; that’s not our intention. We only want to inform you that Panama is not what it seems on the surface of things. Still wondering why you have to dig to find this stuff.

Folks with vested interests will minimize crime, they will downplay it, and they will compare crime to many places in the U.S and say it is much better in the paradise they are hyping up abroad…and until they are a victim of a serious crime, that’s how they are going to play it.

Have you ever talked to someone who has had a gun pointed at their heart? We have talked with several expats who have had just a wallet or cell phone taken and they feel like they’ve been raped, imagine your home getting broken into and armed thugs pointing pistols at your head? Imagine it! Are you going to still be saying “Coronado is relatively safe; I feel safer here than I did in Colorado.”

People who have been victims of crimes have been hurt, they have been seriously trespassed upon and minimizing the crime issues in expat communities abroad does not help anyone!

We now leave you with a few comments from expats and expat victims of crime in Panama.…maybe it will get some of the minimizers to think about the other person instead of always themselves and how much money they can make from the foreigner.  (Click on images to enlarge) 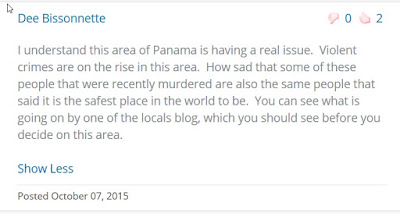 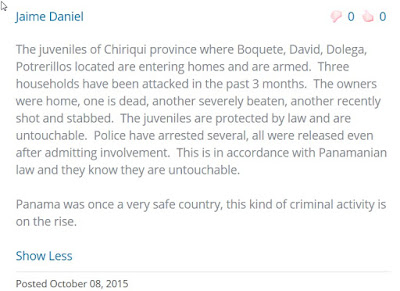 And if you’re thinking that living out in the country in Panama somewhere will be safer, guess again.  Read the whole story from an expat victim here.
Source: Panama Forum

There are many uneasy expats that have been emotionally damaged, leaving comments about their experience of being a crime victim. Reading their stories will bring chills down your spine. These are the things that you will not hear from the travel abroad press or other folks with vested interests. Not all crimes are published as many expats are staying hush-hush so they can sell or rent out their homes in these expat enclaves to unsuspecting expats.

Panama has a lot going for it, and could be a great place to live, but minimizing and/or sweeping serious crimes against foreigners under the rug is a crime against humanity in and of itself.  You are not helping to improve Panama by doing this.  You are prolonging the problem.  Instead, let us all get it out into the open where maybe someone in authority decides it’s time to do something positive about it.

Until we write again…


We're an Expat Family of Five, Living Frugal, Healthy and Happy Abroad. We live in Cuenca, Ecuador and travel the Ecuador coast whenever we get a chance. We just adventured throughout the country of Panama for five weeks! Come along and enjoy some of our experiences with us!
Posted by Discover Cuenca Ecuador at Tuesday, December 01, 2015